10 Top Things to Do in High Atlas Region 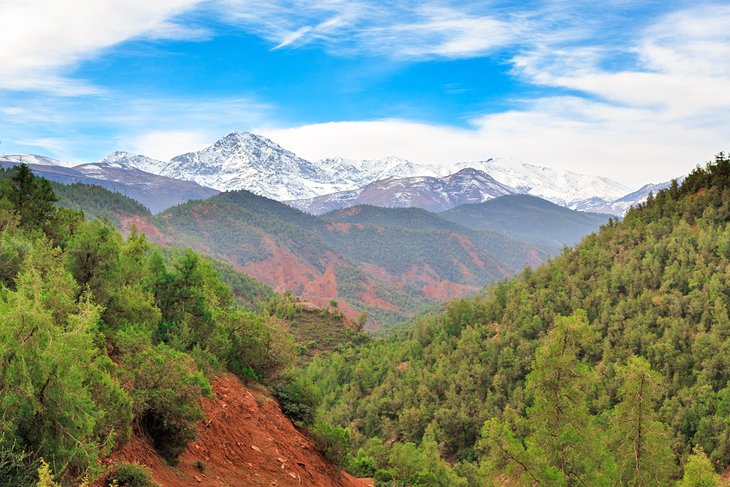 Posted by desertbrise on 20 January 2022 | Featured | No Comments

The mountainous High Atlas region of Morocco is home to some of the country’s most raw and beautiful scenery.

Villages cling dangerously to mountain slopes or burrow into deep valleys. In the distance, snowcapped peaks sparkle, while a carpet of lush green fields spreads out in front of you.

The best spot to visit in Morocco for outdoor activities is here. Hiking, climbing, and mountain biking are the most popular.

If busting up a sweat isn’t your thing, the High Atlas has lots of historical tourist attractions to offer. The region’s most famous sight is the mudbrick kasbah of Ait Ben Haddou, but there is a plethora of traditional kasbah and ksour architecture to explore around the region, as well as spectacular mountain views to take in.

Check out our selection of the best things to do in Morocco’s High Atlas region to see what you shouldn’t miss.

Its enormous adobe fortifications rise amid beautiful fields and almond orchards, overlooking the desolate cliffs of the Ounilla Valley, and appear to have sprouted organically from the ground.

Ait Ben Haddou’s history dates back to the 11th century when it was a vital halt on trans-Saharan caravan routes. Today, only a few villagers live within the fortified walls, with the majority of families residing outside the fortified walls in the contemporary village.

It is UNESCO World Heritage designated as one of the finest mudbrick-constructed buildings in the country, and its beauty has enchanted Hollywood for decades. Lawrence of Arabia, Jesus of Nazareth, and Gladiator, to name a few, have all had scenes shot here.

Climb up into the kasbah towers for the greatest views of the surrounding area.

30 kilometers northwest of Ouarzazate and 170 kilometers southeast of Marrakesh is Ait Ben Haddou. Don’t expect to have the spot to yourself; it’s a popular day-trip destination from both towns, as well as a key High Atlas stop-off site for treks to the Sahara sands.

The settlement of Imlil, at the base of the mountain, is fully equipped for trekkers. who want to attempt the two-day guided ascent to Toubkal’s top, with plenty of lodging and guide services.

The mountain trek is non-technical in the summer, but the scree slopes and altitude make it difficult. Regardless, this is the most popular route in the High Atlas.

Most trekkers spend the night at the Toubkal Refuge, at the end of the first day’s walk before getting up extremely early the next morning to climb to the top and then descend by the same route.

Because Imlil is only 67 kilometers south of Marrakesh, the hike is a simple High Atlas add-on to a visit to the city

3. Hike in the Dades Valley

Because of the strange rock formations, decaying kasbah buildings, little settlements, and breathtaking mountain landscape inside the valley, the Dades Valley is one of Morocco’s top trekking and hiking destinations.

Nature enthusiasts should keep a watch out for eagle and lammergeyer (bearded vulture) sightings, while trekkers will enjoy the empty trails. The drive into the valley on the switchback road is an adventure in and of itself.

Several attractive villages are in the area and should include in any journey here.

El Kelaa M’Gouna in the heart of Morocco’s rose-growing region (where the products of famous rose essence ) and visiting in the spring when the blooms bloom is a delight. Every Wednesday, a souk is held here.

The settlement of Azlag is known for creating some of the country’s finest daggers, and it is home to over 120 active blacksmiths. The kasbah is the village’s principal tourist attraction.

Read More :16 Top-Rated Attractions & Things to Do in Marrakech

The Ouzoud Waterfalls. on the outskirts of the Ouzoud hamlet are one of Morocco’s most popular natural attractions, with water plummeting for 110 meters across three stages.

The cascades are popular with both locals (who come here for weekend picnics) and visitors from other countries, and the gorge you descend into to see them can get crowded, especially when day-trip buses from Marrakesh arrive.

The water runs red-brown if you come at the cascades after a lot of rain, producing a spectacular and surreal effect.

Marrakesh is 156 kilometers northeast of Ouzoud, and Azilal is 27 kilometers west. Most visitors come for a day excursion from Marrakesh, but if you want to see the waterfalls without the crowds, both Ouzoud and Azilal have lodging choices.

5. Road Trip through the Draa Valley

The Draa Valley is the entryway to one of Morocco’s most famous sand dune fields in the Sahara region beyond, but it’s also a fascinating place to visit, with kasbahs (fortified buildings) and ksour (fortified towns; plural of ksar) architecture and palm grove beauty.

The Draa Valley was once the path of trans-Saharan caravans, which explains the abundance of classic mudbrick fortresses along the valley bottom.

The greatest locations to halt in the valley are Agdz and Tamnougalt. Agdz has two kasbahs to visit, and Tamnougalt’s labyrinthine ksar is one of the country’s oldest.

Zagora is located at the southeastern extremity of the valley, where the valley terminates and Morocco’s Sahara area begins.

Zagora is the perfect location for exploring the Draa Valley because it has a wide range of accommodation alternatives. It’s an excellent site to stay overnight if you’re travelling into the desert before continuing on to the oasis of M’Hamid, which serves as the starting point for trips to the Erg Chigaga dunes.

6. Rock Climb or Hike in the Todra Gorge

The 14-kilometer-long and 300-meter-deep Todra Gorge, hemmed in by massive pink- and orange-hued granite walls, is Morocco’s premier rock-climbing site, as well as a popular trekking and 4WD trip destination.

The Todra Loop, which takes in some of the best gorge vistas, is the most popular hike here. Climbers will find numerous of rock climbing routes at the Pillar du Couchant section of the gorge.

Along the gorge basin, there are cafés and other amenities, as well as some lodging. If you’ve been spending too much time in cities on your travels, this calm location is a particularly soothing respite.

The Toubkal Circuit is one of the most popular multi-day walking routes in Morocco’s High Atlas.

The Toubkal Circuit, which begins in Imlil and travels 60 kilometers in a circular route through the hill country surrounding Jebel Toubkal (with a summit ascent on the second to last day), provides some of the best scenery in the High Atlas as well as an excellent opportunity to acclimate properly before tackling Jebel Toubkal.

Although the route takes seven days, some hikers choose to lengthen it to divide it up into shorter walking days and/or include a rest day.

Many hiking companies in Imlil can arrange Toubkal Circuit treks, including guides, mules (for carrying packs), and walking equipment.

8. Explore the High Atlas Base Town of Ouarzazate

Ouarzazate is home to the majestic Taourirt Kasbah, which is located at the intersection of the Draa, Dades, and Ziz Valleys.

This town, which is surrounded by stunning vistas that are popular with film crews (scenes from Gladiator, Kundun, and Alexander the Great have all been filmed in the surrounding countryside), has become a popular base for excursions farther into the High Atlas region.

The colorful monthly Sunday market sells everything from fruit to handcrafted items. If you’re in town at the time, don’t miss it.

The only real tourist attraction in town is the Taourirt Kasbah. The kasbah was built in the 19th century and was heavily used by the Glaoui family in the early twentieth century, when they dominated over most of this region.

The Kasbah of Tifoultoute is located nine kilometers west of town. It’s a beautifully preserved mudbrick stronghold with breathtaking views from the summits of its turrets, where storks frequently nest. This Kasbah, like the one at Ouarzazate, was built in the early twentieth century for the Glaoui family, who once ruled this region.

9. Discover the Kasbahs & Countryside around Telouet

Telouet’s kasbah is a powerful fortification built in the 19th century (and greatly extended in the early 20th century) by the ruling El Glaoui family, and is frequently visited on day trips from Marrakesh.

After aligning himself with the French conquering forces, Pasha Thami El Glaoui became the ruler of Marrakesh.

Read More : 15 Exciting Things to Do in Morocco

The kasbah is a fascinating, though decaying, site within, with a maze of rooms that retain some of their former lavish decorations.

Telouet is a great place to start exploring the surrounding area, especially 4WD tours and hikes through the Ounila Valley, which connects isolated traditional communities. Don’t miss Anmiter, with its decaying kasbah, in particular.

10. Enjoy the Mountain Scenery of the Ourika Valley

The Ourika Valley is one of Morocco’s most popular outdoor activity zones and is one of the easiest parts of the High Atlas region to visit from Marrakesh (just 50 kilometers west of the city and easily accessible for weekender travelers and day visitors).

This valley, surrounded by lush green meadows, is home to beautiful waterfalls and good hiking paths.

The settlement of Setti Fatma is the most popular day-trip destination, with a hike-scramble up to surrounding waterfalls and panoramic views of distant mountain peaks.

The town is also a good starting point for longer treks, as well as the commencement of the three-day Jebel Yagour trip.

Tips and Tours: How to Make the Most of Your Visit to Morocco’s High Atlas Region